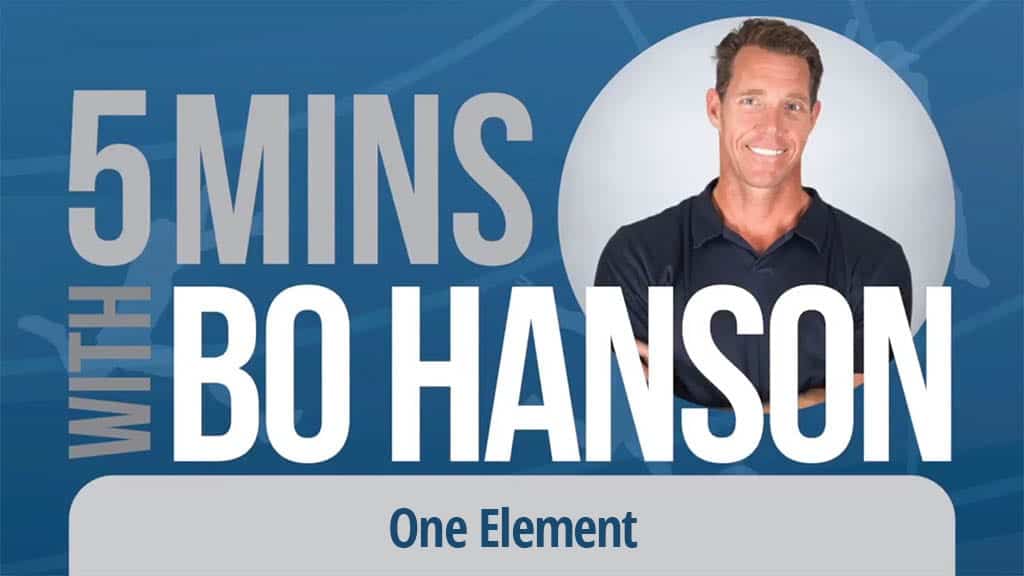 One Element: 5 Minutes with Bo Hanson

Today we’re going to talk to you about a concept which we call “The One Element” concept. Now this is something that I’ve noticed when we look at all of the teams that we’ve worked with now, more than 40 different sports, 700 teams, more than 22 thousand coaches, athletes, officials and people who are very good at what they do. What we’ve noticed is that these individuals and these teams, when you ask them “What is it that makes you as good as you are?” A lot of them are able to say, “Well we do a lot things well but really THIS is the key thing that we do well.” So they’re able to break down all of the things they do well into one absolutely core element that we call the One Element factor.

When we talk about One Element, we’re talking about breaking that in two. There is the one element technically that teams do well and there is the one element non-technically that teams do well. This relates to what we talk about with the GRIP Process, we talk about roles that people have like a technical role and a non-technical role. But we’re talking about teams that are really successful, perhaps their technical element could be the fact that they’re defensively the best team in the competition, perhaps they’re a basketball team that creates lots of deflections, they’re so good at their one on one style of play, that defensively throughout the entire court, that is the number one thing that they pin their pride on and that ultimately delivers them their success and their results.

When we’re talking about the non-technical factor, it could be the fact that the team has such a high level of trust which results in such a high level of team chemistry and hence a better culture for that team. But when they say what’s the one thing that we do well? We just trust each other to the nth degree. There’s zero question around our level of commitment and accountability to one another. So trust becomes their non-technical One Element.

What we’re encouraging teams to do and there is an article on our website that goes into more detail about this, but ultimately what we’re encouraging teams to do is to discover what their elements are. What is that technical element that you do so well that helps you win games? And what is the non-technical factor you do well that makes you a great team? Once you find these elements, what’s really critical is that your whole system, your whole sports program is reflected in these elements. What I mean by that is, there was a soccer team I was working with and the soccer team said that we as a team this season we focus very much on being the best structured team in the competition. So every opportunity that they could get, where ever they could get their goals from would usually be from a set play whether that be a corner conversion or the like. So they weren’t a team that had a lot of shots on goal, but the ones that they did have they had the opportunity to restructure their play and obviously a set play to score those opportunities. Despite the fact that that resulted in the best season they’ve ever had, next season was going to be something else. So that element doesn’t need to change, it just needs to be developed even further because that is something that was delivering results.

Now if we change our one technical element or our non-technical element from one season to the next, it impacts every other aspect of our program. It impacts the type of training program we select and it especially impacts the type of athletes and student-athletes that we recruit for the particular team. If we’re going to have a very structured style of play we need to make sure that the type of players we select want to play that style. If we want to be the most aggressive attacking team in the competition, knowing that we’re going to rely on scoring more points than the opposition, defensively we may not be that great but we’re going to score more points then you have to recruit players that want to play that style. If you recruit attacking players but you’re going to be the best defensive team, that’s going to be asking players to make an adaptation. As we know the bigger the adaptation a player has to make, the less comfortable it is and their likelihood of doing it for a long period of time over the space of a season is less. The point here is, once we define our elements they become part of the process if you like part of the system of how we do everything. From one year to the next it doesn’t change. You can think about some of the best teams that you play against and the reality is that these teams you can actually say well they are the best at this. There are teams that we know, clients talk about them being the fastest team in the competition, no one can beat their speed of play. Other teams are defensively the best team in the competition; some other teams are the best attacking team in the competition. So it’s a key thing to define what your element is and stick with that and if it’s not producing you results you either have the opportunity to change or if it is producing average results you need to develop it.