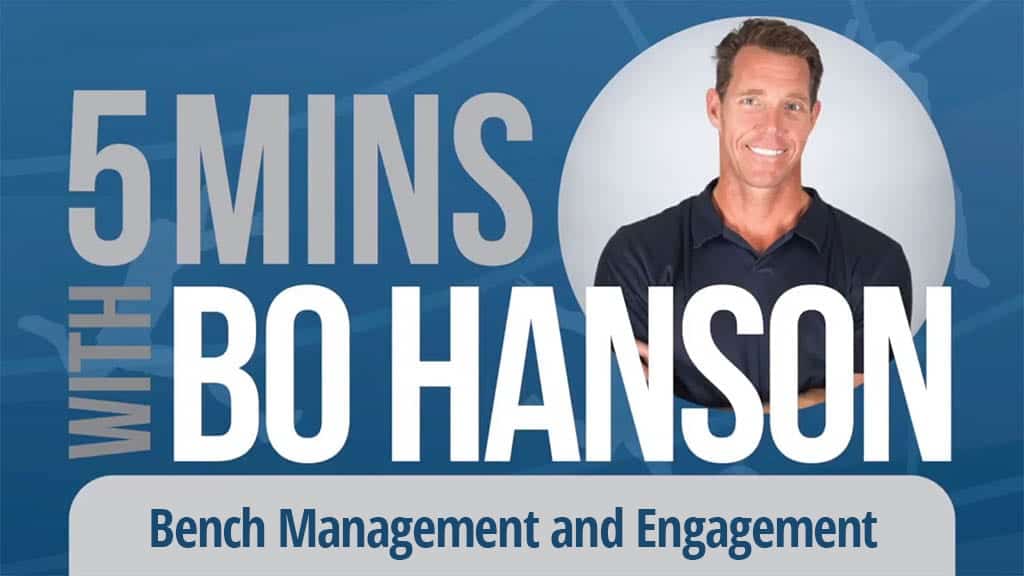 Bench Management and Engagement in Sport: 5 Minutes with Bo Hanson

In a lot of teams, it actually becomes a major issue in whether or not the team does go on to achieve what they set out to achieve at the beginning of the season, which is often to  win championships. So when I talk about bench engagement I’m talking about the degree to which the players that, know they’re going to make up those bench spots and they know that their opportunity to play may be due to a mishap of another teammate, but they do understand what the pecking order is in the team. Some teams will have something we call a depth-chart where it’s really clear and very transparent where you sit in that order. When you can base a depth chart on some very key statistical data and evidence, it does give people clarity on where they sit in relation to everyone else on the team. Really importantly though, it shows how they can progress up that bench chart.

So one of the key things we talk about is player engagement and obviously, bench engagement. In fact some of the teams that have been very successful have had the goal to have the best bench in the competition. What we find is with players that are on the court or field, whatever sport it may be, when they look at their bench, they want to see engaged, energetic and enthusiastic people who are giving them an enormous amount of support. Players really do look at that and really value it.

Bench player engagement is one of the most fundamental issues that we find in the most successful teams. They tend to do it just that little bit better than teams that aren’t as successful.

RJ: We use a variety of models to establish team identity and organisation identity with our teams. One of them is the GRIP Model; I was wondering how it could be used to establish bench engagement?

Bo: Well the GRIP Model is a great model to establish a foundation and it’s part of the system we use when we work with any sports team. As it applies to having a really highly engaged bench, what we’re really talking about is a team that has clarity over what it’s goals are for the season and then the second part is linking that to the values and behaviors. If they are of the highest level and everyone on the team, whatever their position may be, finds a way to live up to those behavioral expectations, then we are going to get a great result. It’s actually really uncommon.

We’ve worked with teams where they haven’t been as successful as they would have liked and then the next year they go on to win a championship. The difference is usually just a few percentage points in terms of living up to those behaviors to the nth degree. So that’s a part of it.

Whether you’re out on the bench, seeing court time, or out there every match, a coach should hold the same expectations for every player. Really critically, what can help engage the bench is to recognize that there’s no one player that stands above everyone else. For example, the teams that we see having a very engaged bench have coaches that are keen on their development, they’re interested in the development of the bench players. These coaches are interest in the bench players to the same degree that they’re interested in what you would refer to as your starting line-up. They don’t differentiate between those players.

The other really important part when we talk about the GRIP Model is when we talk about roles. The reality is, particularly in college sport, that there is going to be a bench. It’s going to be a little bit different in professional sport because you can specifically identify the numbers that you want and you’re not held to any NCAA rules about what numbers you have to carry on your team. The reality is everybody plays a role. The teams that have an engaged bench, what we find is that they’re really clear on articulating what everybody’s role on the team is going to be. They’re also really clear on and have made the link that, if our team is going to be more successful, our bench has to be highly engaged. Ultimately, they’re providing not just some level of competition for those spots, but they’re providing support, encouragement, energy and enthusiasm. That’s a really critical part.

When we define roles we’re really careful not to just focus on what our technical roles are but also to put just as much emphasis on what that bench role can be. I think there are a lot of good examples, particularly a team we worked with a few years ago that are still a client today. When they won their championship, they had a player was intermittently coming on and off the court in this respective sport. This player was recognized as being the heart and soul of the team. In terms of being a bench style player, they’d managed to find a place for themselves on the team where every time that they went on to the court they made a massive impact. They became recognized as an impact player. When they weren’t on the court they were also having a significant impact  because of the way that they were cheering, the way that they were enthusiastic, the way that they were supporting their teammates was of the highest quality. That has really set a tone and a standard for this team even years past that time when this player played. Everybody remembers who they were and everybody remembers the contribution that they made.

Once again it’s all about your roles and how you articulate it, but think about it beyond a technical position. Think about how else can someone make a contribution.