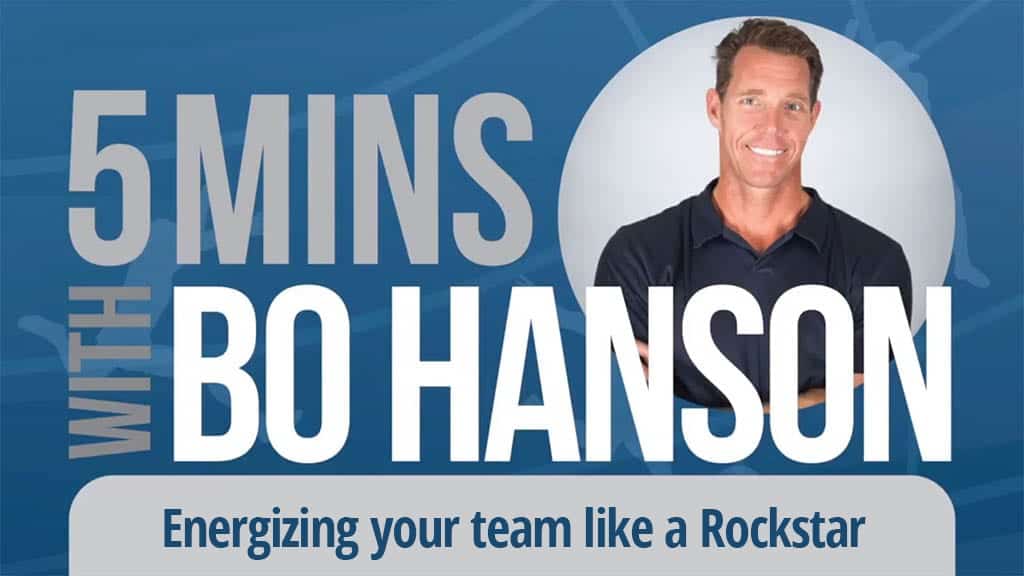 5 Minutes with Bo Hanson: Energizing your team like a Rockstar

The first one is on values.

At Athlete Assessments one of our values is growth. It’s a human need. Everyone needs to feel they are growing, developing, improving and for us that’s certainly the case. But how do we go about achieving growth?

From our perspective, one of the tag lines we attach to that value is ‘looking for learning everywhere’. So, this means that you are constantly looking for a learning opportunity. It could be going to the local bakery, it could be going out to dinner and noticing the service, the level of enthusiasm or whatever it might be, there’s always opportunities to learn.

The second lesson is on- energizing your team like a Rockstar.

In the conversations I’ve had recently with teams, the athletes don’t feel positive about the fact that they’re not able to be 100% energized for the duration of our 3-hour practices.

It caused me to reflect on one of the experiences I had with my mentor many years ago now when he talked about how we utilize energy over a long period of time.

When I was talking to the teams, I explained the fact that it’s unrealistic to be energized for that length of time and I vividly remember what it was like walking into my first opening ceremony way back in 1992 at the Barcelona Olympics. I remember how much energy you expend in anticipation of getting to the venue, waiting with all the other athletes in the massive holding stadium, hearing the crowd as you’re walking out underneath the main stadium and finally walking around the actual facility itself on the track and watching the flame being lit. And critically, how you felt the next day, after you expended that amount of energy. You have this massive depleted feeling and if that coincides with your competition you’re in trouble.

So, being energized all the time isn’t a healthy thing. When we talk about being energized in the right way, we use the analogy of being at a rock concert, because ultimately our job as Coach and athlete is to manage energy in a similar way to the way our favorite band would manage us at one of their concerts.

If you imagine that you’re going out to practice that afternoon, there’s an anticipatory level of enthusiasm to want to be there. When you’re going to a concert, you’re thinking about how good the band is going to be, you’re going to hear your favorite songs and that’s going to be an enjoyable experience.

But when you arrive at the concert you’re often surrounded by people, it’s not always that exciting and you had to travel a long way to get there. It’s a little uncomfortable, so you may be a little de-energized and de-motivated.  It then starts to get a little darker and then suddenly a roadie comes up on stage and people start clapping and cheering and you know something great is about to happen.

They play 3 or 4 of them and the energy peaks and then they play some of their slower songs or some of their not so common songs and the energy dips off again and they peak it a little bit more throughout the duration of the concert till the very end comes when there are a couple of songs that you’re waiting to hear that they haven’t played yet.

Our practices have to be exactly the same.

So in that encore performance, we only play one or two maybe maximum 3 songs because the band knows as energized as you are right now, you can’t maintain that energy for the longer than 10 – 15 minutes. The most important thing is that when you practice, it has to end with something that is massively energizing and then stop. Therefore, it doesn’t end in a slow moving, methodical and boring sort of way. So, think about planning your practices like a rock concert.

Another critical thing that came up as a major lesson to reflect on from this year is the importance of setting micro goals.

We talk about developing our cue words and from our cue words come those fine motor skill movements that are foundational to performing at the highest possible level.

However, if we’re not able to break our goal down to something we have total control over it’s a completely ineffective goal and I’m not just talking about process I’m talking about a deeper level than process.

I vividly remember when I would row, one of my focus points was my connection with the water and could I feel it in my fingers. Then for me, it was about maintaining that sense of feel in my fingertips as the blade and oar came towards my body and released cleanly from the water. That’s what connected me to the boat.

That’s something I had total control over regardless what the conditions were and what the race was, and I knew that if I focused on that micro goal of having control of my fingertips, I always rowed well.

That’s what worked for me and what works for someone else is going to be completely different. But it wasn’t attached to a number, I could measure it personally and if I was on a machine I knew what it looked like due to the force curve it would produce. That’s what we mean by a micro goal and this is another key lesson I took out of this year.

It’s important to live in moments, because sport is made up of 1000’s of moments.

A lot of athletes, when they make a mistake, get down about making that mistake and then take too long trying to recover and then the next moment has already passed them. When we think about the game as individual little moments that we have to draw our attention to and focus on. When we make a mistake in that moment, it’s just a moment, it doesn’t mean anything more than just a moment and that’s another reframe from a content perspective.

Just think about it as that moment means that I can get the next moment right. One moment is not completely significant when there’s a thousand of them. However, if I think it’s bigger than what it actually is, and I not only make a mistake in that moment, then the next 10 to 20 moments suffer as well.

So, living in the moment, I know it’s a cliché but it’s so critical, you need to have strategies to do that and it comes from setting your tiny little micro goals.